IPOs: Profiles Are High. What About Returns? – Fourth Quarter 2019

IPOs: Profiles Are High. What About Returns?

In recent months, investors have had the opportunity to buy shares of ride‑hailing networks Uber and Lyft, workplace productivity services Zoom and Slack, and other high-profile businesses ranging from Pinterest to Beyond Meat.

News outlets contribute to the frenzy, building anticipation, tracking the early hours of trading, and casting judgment on the IPO’s success. Investors, perhaps lured by tales of outsized returns, try to get in on the action early.

New research by Dimensional Fund Advisors reveals the fundamental challenges IPO investors face. For example, investors may not be able to trade during the early hours of the IPO, when the biggest price movements frequently occur. Lockup periods also often restrict when shares held by early investors can be resold on secondary markets, which can meaningfully limit the available liquidity in the first six to 12 months after an IPO.

Medium‑term IPO performance is often underwhelming. The research team at Dimensional studied the first-year performance of more than 6,000 US IPOs from 1991 to 2018 and found they generally underperformed industry benchmarks. The researchers also found that known drivers of expected returns largely explain that underperformance.

IPOs are commonly associated with outsized stock returns on the first day shares become available, although these returns may not be attainable by all investors due to the allocation process. Researchers have shown that initial trading prices typically exceed the IPO offering price.1 However, accessing these first-day returns requires an allocation from the underwriting banks. Studies have documented an adverse selection problem associated with IPO share allocations and find that allocations to IPOs having poor first-day returns have generally been easier to obtain, while allocations to IPOs with good first‑day returns have usually been reserved for certain clients of the underwriting banks.2

Given that many investors may not be able to access these initial returns, Dimensional focused on the performance of IPOs in the secondary market. How do IPOs perform in their first year?

The sample for Dimensional’s study consists of 6,362 US IPOs that occurred from January 1991 to December 2018 and for which data is available.3  Exhibit 1, below, shows the annual frequency and market cap distribution of IPOs among firm size groups. The period from 1991 to 2000 is characterized by a relatively high IPO frequency rate of 420 per year and is followed by a less active 18-year period during which the rate falls to 120 IPOs on average per year. Although the number of IPOs has declined, the average IPO offering size is almost three times larger over the most recent period, as compared to the initial 10 years in the sample.

Most IPOs fall into the small cap size group, defined as firms that fall below the largest 1,000 US‑domiciled common stocks at the most recent month‑end. Large cap and mid cap IPOs represent 24% and 19%, respectively, of total capital raised through IPOs over the sample period. 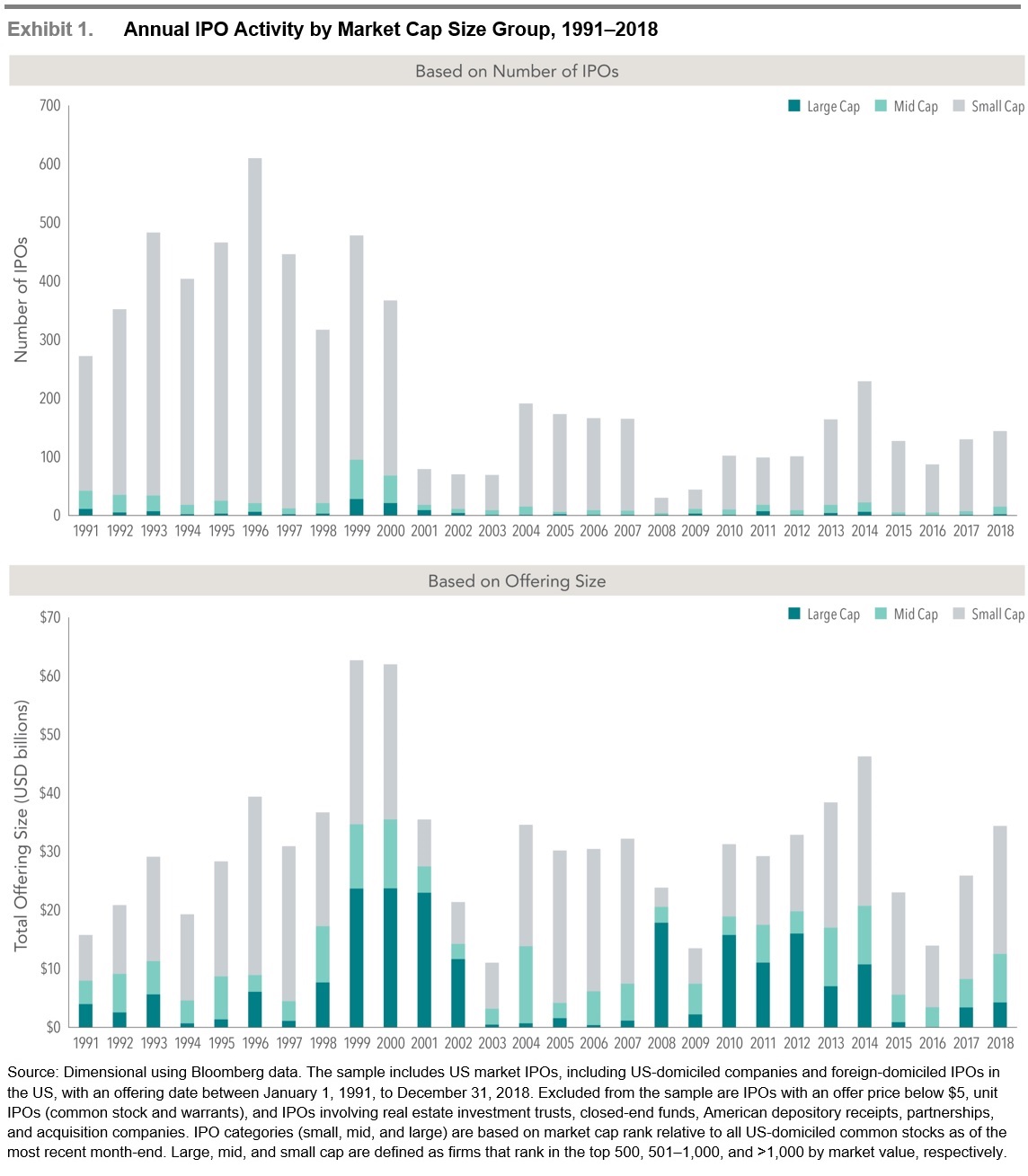 Dimensional evaluated IPO returns by forming a hypothetical market cap-weighted portfolio consisting of IPOs issued over the preceding 12-month period, rebalanced monthly.4 This methodology excludes the initial first-day returns by design to alleviate the adverse selection problem inherent in the IPO allocation process. Exhibit 2, below, compares the returns of the IPOs to the returns of the Russell 2000 and 3000 indices over the full sample period as well as two subperiods covering 1992–2000 and 2001–2018. IPOs underperform the Russell 3000 Index in both the overall period and sub-sample periods. For example, IPOs generate an annualized compound return of 6.93%, 13.63%, and 3.74% over the full, initial nine-year and final 18-year sample periods, respectively, as compared to 9.13%, 15.70%, and 5.98% for the Russell 3000 index over the same time horizons. In comparison to the Russell 2000 Index, the hypothetical portfolio of IPOs underperforms in the overall period (6.93% vs. 9.02%) and the 2001–2018 (3.74% vs. 7.29%) subperiod and outperform (13.63% vs. 12.56%) over the period from 1992 to 2000.

Known drivers of returns largely explain the underperformance of IPOs. IPOs have underperformed the market because, as a group, they have behaved like small growth, low profitability, high investment stocks, which have had lower expected returns than the market.5

Investors considering IPOs should be aware of potential adverse selection and post-offering activities, such as the expiration of insider lockup periods. Investors should also understand that IPOs have generally underperformed broader market benchmarks in recent decades and that their fundamental characteristics suggest lower expected returns.

The term “investment banker” is applied to a firm that engages to an important extent in originating, underwriting, and selling new issues of stocks and bonds [i.e. IPOs]. (To underwrite means to guarantee to the issuing corporation, or other issuer, that the security will be fully sold.) A number of brokerage houses carry on a certain amount of underwriting activity. Generally, this is confined to participating in underwriting groups formed by leading investment bankers. There is an additional tendency for brokerage firms to originate and sponsor a minor amount of new-issue financing, particularly in the form of smaller issues of common stocks when a bull market is in full swing.

Investment banking is perhaps the most respectable department of the Wall Street community, because it is here that finance plays its constructive role of supplying new capital for the expansion of industry. In fact, much of the theoretical justification for maintaining active stock markets, notwithstanding their frequent speculative excesses, lies in the fact that organized security exchanges facilitate the sale of new issues of bonds and stocks. If investors or speculators could not expect to see a ready market for a new security offered them, they might well refuse to buy it.

The relationship between the investment banker and the investor is basically that of the salesman to the prospective buyer. For many years part the great bulk of the new offerings in dollar value has consisted of bond issues that were purchased in the main by financial institutions such as banks and insurance companies. In this business the security salesmen have been dealing with shrewd and experienced buyers. Hence any recommendations made by the investment bankers to these customers have had to pass careful and skeptical scrutiny. Thus, these transactions are almost always effected on a businesslike footing.

But a different situation obtains in a relationship between the individual security buyer and the investment banking firms, including the stockbrokers acting as underwriters. Here the purchaser is frequently inexperienced and seldom shrewd. He is easily influenced by what the salesman tells him, especially in the case of common-stock issues, since often his unconfessed desire in buying is chiefly to make a quick profit. The effect of all this is that the public investor’s protection lies less in his own critical faculty than in the scruples and ethics of the offering houses.

It is a tribute to the honesty and competence of the underwriting firms that they are able to combine fairly well the discordant roles of adviser and salesman. But it is imprudent for the buyer to trust himself to the judgement of the seller. In 1959 we stated at this point: “The bad results of this unsound attitude show themselves recurrently in the underwriting field and with notable effects in the sale of new common stock issues during periods of active speculation.” Shortly thereafter this warning proved urgently needed. As already pointed out, the years 1960-61 and, again 1968-69 were marked by an unprecedented outpouring of issues of lowest quality, sold to the public at absurdly high offering prices and in many cases pushed much higher by heedless speculation and some semimanipulation. A number of the more important Wall Street houses have participated to some degree in these less than creditable activities, which demonstrates that the familiar combination of greed, folly, and irresponsibility have not been exorcised form the financial scene.

The intelligent investor will pay attention to the advice and recommendations received from investment banking houses, especially those known by him to have an excellent reputation; but he will be sure to bring sound and independent judgement to bear upon these suggestions—either his own, if he is competent, or that of some other type of adviser.

Data sources for returns and standard statistical data are provided by the sources referenced and are based on data obtained from recognized statistical services or other sources we believe to be reliable. However, some or all information has not been verified prior to the analysis, and we do not make any representations as to its accuracy or completeness. Any analysis nonfactual in nature constitutes only current opinions, which are subject to change. Benchmarks or indices are included for information purposes  only  to  reflect  the  current  market  environment;  no  index  is  a directly  tradable investment.  There  may  be  instances  when  consultant  opinions  regarding any fundamental or quantitative analysis do not agree.

The  commentary  contained  herein  has  been  compiled  by  W.  Reid Culp,  III  from  sources  provided  by  TAGStone  Capital,  DFA,  Vanguard,  Morningstar,  as well  as  commentary  provided  by  Mr.  Culp,  personally,  and  information independently  obtained  by  Mr.  Culp.  The  pronoun  “we,”  as  used  herein,  references collectively the sources noted above.