The Power of Markets – Fourth Quarter 2016

The Power of Markets

In 1958, economist Leonard Read published an essay entitled “I, Pencil: My Family Tree as Told to Leonard E. Read.”1 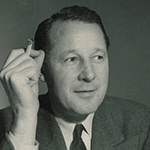 The essay, narrated from the point of view of a pencil, describes the “complex combination of miracles” necessary to create and bring to market the commonplace writing tool that has been used for generations. The narrator argues that no single individual possesses enough ability or know-how to create a pencil on their own. Rather, the mundane pencil—and the ability to purchase it for a “trifling” sum—is the result of an extraordinary process driven by the knowledge of market participants and the power of market prices.

The Importance of Price

Upon observing a pencil, it is tempting to think a single individual could easily make one. After all, it is made up of common items such as wood, paint, graphite, metal, and a rubber eraser. By delving deeper into how these seemingly ordinary components are produced, however, we begin to understand the extraordinary backstory of their synthesis. Take the wood as an example: To produce wood requires a saw, to make the saw requires steel, to make steel requires iron. That iron must be mined, smelted, and shaped. A truck, train, or boat is needed to transport the wood from the forest to a factory where numerous machines convert it into lumber. The lumber is then transported to another factory where more machines assemble the pencil. Each of the components mentioned above and each step in the process have similarly complex backstories. All require materials that are sourced from far-flung locations, and countless processes are involved in refining them. While the multitude of inputs and processes necessary to create a pencil is impressive, even more impressive are the coordinated actions required by millions of people around the world to bring everything together. There is the direct involvement of farmers, loggers, miners, factory workers, and the providers of capital. There is also the indirect involvement of millions of others—the makers of rails, railroad cars, ships, and so on. Market prices are the unifying force that enables these millions of people to coordinate their actions efficiently.2 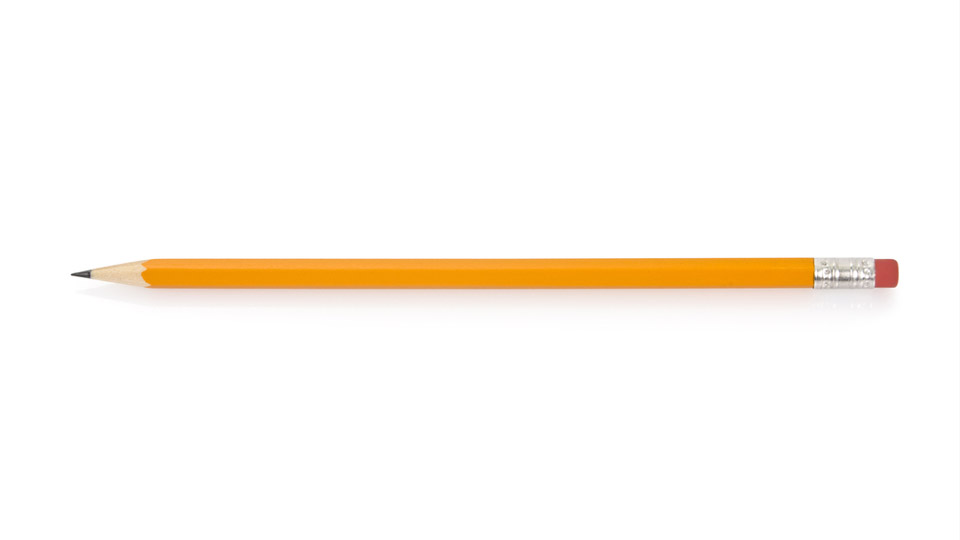 Workers with specific knowledge about their costs, constraints, and efforts use market prices to leverage the knowledge of others to decide how to direct their own resources and make a living. Consider the farmer, the logger, and the price of a tree. The farmer will have a deep understanding of the costs, constraints, and efforts required to grow trees. To increase profit, the farmer will seek out the highest price when selling trees to a logger. After purchasing the trees, the logger will convert them to wood and sell that wood to a factory. The logger understands the costs, constraints, and efforts required to do this, so to increase profit, the logger seeks to pay the lowest price possible when buying trees from the farmer. When the farmer and the logger agree to transact, the agreed upon price reflects their combined knowledge of the costs and constraints of both growing and harvesting trees. That knowledge allows them to decide how to efficiently allocate their resources in seeking a profit. Ultimately, it is price that enables this coordination. On a much larger scale, price formation is facilitated by competition between the many farmers that sell trees to loggers and between the many loggers that buy trees from farmers. This market price of trees is observable and can be used by others in the production chain (e.g., the lumber factory mentioned above) to inform how much they can expect to pay for wood and to plan how to allocate their resources accordingly.

The Power of Financial Markets

There is a corollary that can be drawn between this narrative about the market for goods and the financial markets. Generally, markets do a remarkable job of allocating resources, and financial markets allocate a specific resource: financial capital. Financial markets are also made up of millions of participants, and these participants voluntarily agree to buy and sell securities all over the world based upon their own needs and desires. Each day, millions of trades take place, and the vast collective knowledge of all of these participants is pooled together to set security prices. Exhibit 1 shows the staggering magnitude of participation in the world equity markets on an average day in 2015.3 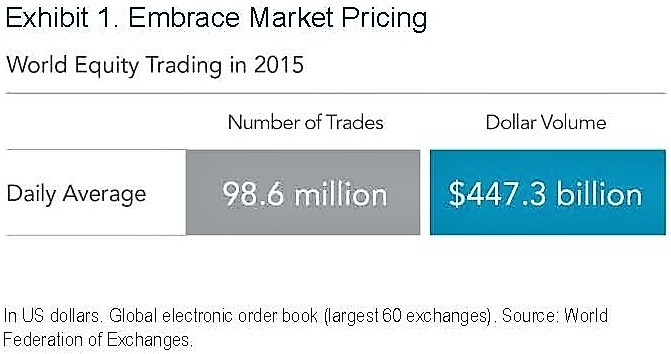 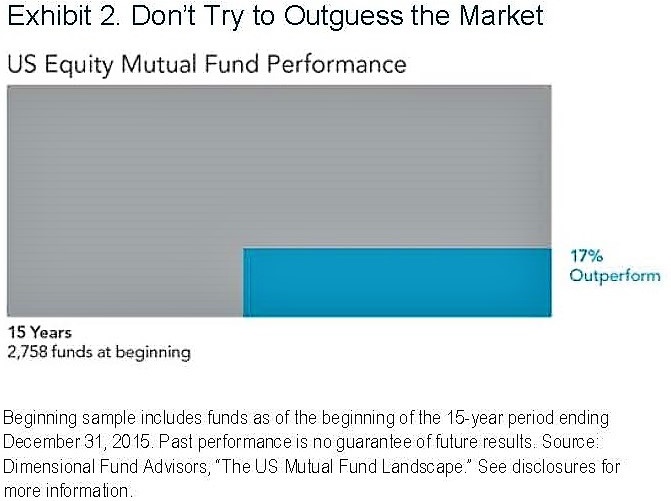 The Rewards of Providing Capital

The beauty of Leonard Read’s story is that it provides a glimpse of the incredibly complex tapestry of markets and how prices are formed, what types of information they contain, and how they are used. The story makes it clear that no single individual possesses enough ability or know-how to create a pencil on their own but rather that the pencil’s miraculous production is the result of the collective input and effort of countless motivated human beings. In the end, the power of markets benefits all of us. The market allows us to exchange the time we require to earn money for a few milliseconds of each person’s time involved in making a pencil. For an investor, we believe the lesson here is that instead of fighting the market, one should pursue an investment strategy that efficiently and effectively harnesses the extraordinary collective power of market prices. That is, an investment strategy that uses market prices and the information they contain in its design and day-to-day management. In doing so, an investor has access to the rewards that financial markets make available to providers of capital.

The Election: A Vote for Small Cap Stocks?

In the days immediately following the recent US presidential election, US small company stocks experienced higher returns than US large company stocks. This example helps illustrate how the dimensions of expected returns can appear quickly, unpredictably, and with large magnitude.

Investors may attempt to enhance returns by increasing their exposure to small company stocks at what appear to be the most opportune times. Yet this effort to time the size premium can be frustrating because the most rewarding results often occur in an unpredictable manner.

A recent paper5 by Wei Dai, PhD, explores the challenges of attempting to time the size, value, and profitability premiums.6

Here we will keep the discussion to a simpler example. As of October 31, 2016, small company stocks had outpaced large company stocks for the year-to-date by 0.34 percentage points.

This recent example highlights the importance of staying disciplined. The premiums associated with the size, value, and profitability dimensions of expected returns may show up quickly and with large magnitude. There is no guarantee that the size premium will be positive over any period, but investors put the odds of achieving augmented returns in their favor by maintaining constant exposure to the dimensions of higher expected returns.

As the Dow Jones Industrial Average attempts to cross the 20,000 point mark and other stock market indices hit all-time highs, some investors might fear the market is “overvalued” or “too high.” While savvy investors know that market corrections occur and that they can occur fast, furiously, and unexpectedly, they also know that it’s hard to time a correction, because you must be right two times. First, in getting out of the market, and second, in getting back in.

We saw this firsthand recently with those investors who moved to cash before the election and ultimately missed out on the post-election rally. It’s important to remember that stocks are forward-looking and typically “price in” anticipated news ahead of time. Moreover, when news changes, stocks incorporate this news into their prices quickly and before most investors can react.

Peter Lynch summarizes the difficulty of market timing by saying, "I can't recall ever once having seen the name of a market timer on Forbes' annual list of the richest people in the world. If it were truly possible to predict corrections, you'd think somebody would have made billions by doing it."

At TAGStone Capital, we think it is a tall task to say that the whole market is wrong or overpriced, because the market may be making rational assumptions about growth or discount rates, even if these assumptions are different from historical averages. Instead of trying to predict the value of the overall market, we think a better strategy is to target dimensions of higher returns (size, value, and profitability), which can present themselves at any time.

Furthermore, if a rational investor believes the market is being irrational—a state in which it can remain for some time—his optimal decision may be to partly ride the wave of optimism—given a predetermined stock/bond ratio and an appropriate rebalancing strategy.

[3] US-domiciled mutual fund data is from the CRSP Survivor-Bias-Free US Mutual Fund Database, provided by the Center for Research in Security Prices, University of Chicago. Certain types of equity funds were excluded from the performance study. Index funds, sector funds, and funds with a narrow investment focus, such as real estate and gold, were excluded.

[4] Funds are identified using Lipper fund classification codes. Correlation coefficients are computed for each fund with respect to diversified benchmark indices using all return data available between January 1, 2001, and December 31, 2015. The index most highly correlated with a fund is assigned as its benchmark. Winner funds are those whose cumulative return over the period exceeded that of their respective benchmark. Loser funds are funds that did not survive the period or whose cumulative return did not exceed their respective benchmark.