As stock markets, once again, continue to hit all-time highs, investors take this news not with celebration, but with trepidation. 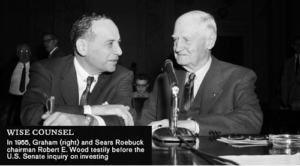 To give a sense of the discussion, below is an excerpt of the statement from Mr. Graham:

"The true measure of common stock values, of course, is not found by reference to price movement alone, but by price in relation to earnings, dividends, future prospects, and to a small extent, asset values.

The Dow Jones industrials are now at a lower ratio to their average earnings in the past than they were at their highs in 1929, 1937, and 1946…. It should be pointed out also that high-grade interest rates are now definitely lower than in previous bull markets except for 1946. Lower basic interest rates presumably justify a higher value for each dollar of dividends or earnings.

Such a figure, if reliable would have to be regarded as rather reassuring. It would indicate that the market in terms of value is no higher now than it was in early 1926, or in early 1936, or late 1946.
It is fair to say the market is not too high today if we really managed to lick the business cycle. Although such a development would involve a revolutionary break with the past, I am not prepared to deny its possibility.

My studies have led to the conclusion that sentiment alone, not supported by any visible change in value, will produce a swing on the order of 100 to 250 or 100 to 300 in price.”

An interesting point to note is that the level of the stock market that the senators were so concerned with was the Dow reaching 381. As we know to-day, the Dow crossed 22,000 for the first time on August 2, 2017. 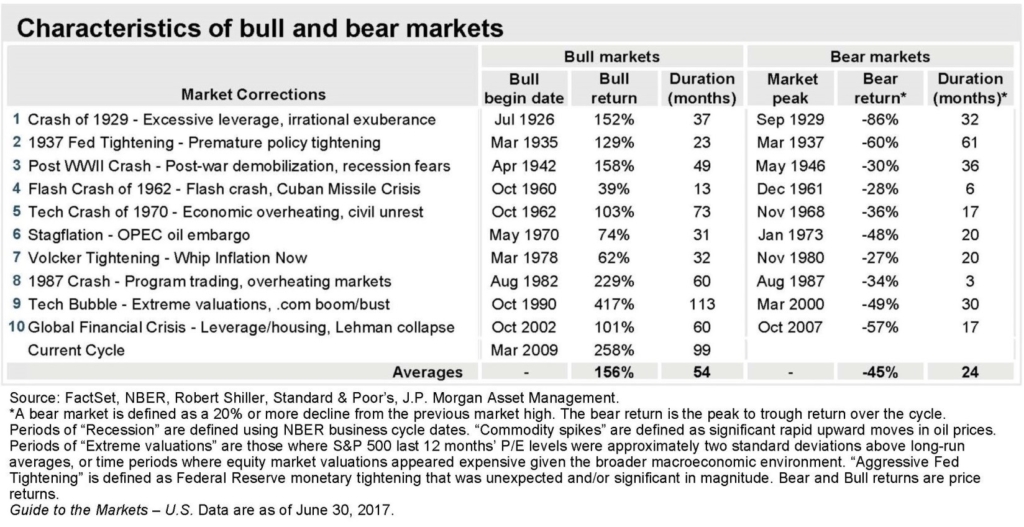 Five Thoughts on the Stock Market

In the context of today’s all-time market highs, Mr. Graham’s 1955 testimony brings several things to mind about the stock market:

1.  Maintain an Asset Allocation that Can Withstand a Market Downturn:

As Mr. Graham stated, the stock market moves in cycles. The common anxiety investors face when investing in a historically high market is the fear of buying at the top, just in time to catch a downturn. And, as you can see in the chart below, the average bear market return, from peak-to-trough has been ‑45%.

A major investment risk individuals encounter during these periods is the risk that the investor sells his or her stock positions during a downturn, turns “paper losses” into real losses, and misses the ensuing bull market. This is why we recommend that you maintain an allocation to stocks and bonds that you can stick with through a market downturn.

In addition, it is important to allocate stock investments across several asset classes, such as small foreign stocks, international and U.S. REIT stocks, and emerging markets stocks. This asset class diversification greatly reduces the risk of being concentrated in a single asset class (such as large U.S. stocks) that endures a decades-long downturn and increases the opportunity to invest in some asset classes that may have lower valuations and produce positive returns.

Mr. Graham’s student, Warren Buffett, might have said it best: “In the short run, the stock market is a voting machine; in the long run, it is a weighing machine.”

5 Thoughts on the Stock Market (continued)

3.  Stock Valuations, in the Long Run, are Related to Corporate Earnings and Cash Flows:

As Buffett’s quote states, stock valuations, in the long run, are related to corporate earnings and cash flows.

At the present time, the S&P 500 is highly valued by most metrics, but as shown in the table below from Goldman Sachs, the free cash flow yield on the S&P 500 is about 4.2%, almost directly on par with its long-term average of 4.0%, showing that the S&P 500 is fairly valued from this measure.

4.  When stocks go down, investors become less inclined to invest, not more inclined:

There is a misguided belief among many investors that they will happily jump back into the stock market once a significant downturn has occurred. “Once we get a 20% downturn, I’ll invest,” goes the thinking.

But during such downturns, fear has usually gripped the market and news headlines are obsessed with how far the market has fallen and how much farther it will go.

5.  Investing Near All-Time Highs is Part of Stock Investing:

Investing near all-time highs is part of stock investing. As shown in the graph to the right, the stock market, from January 1926 to December 2016, has closed at new month-end highs almost 30% of the time.

Historically, however, new highs have not been useful predictors of future returns. As the graph indicates, the chances of positive monthly returns over any 12-month period is about the same, whether the market is hitting a new high or not. 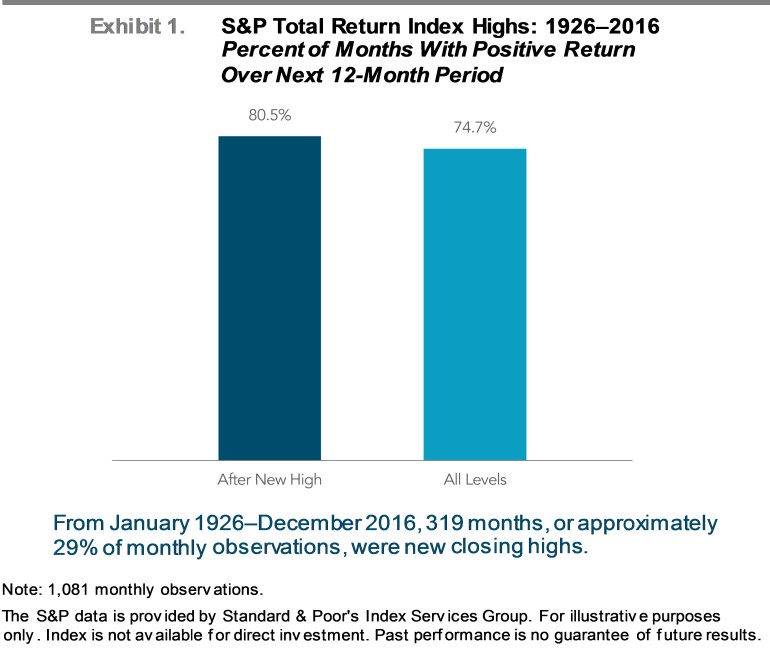 Instead of trying to time the market, TAGStone Capital recommends choosing a prudent investment strategy that you can stick with through any market conditions. Studies have shown that the average investor times the market poorly, getting in at the top and getting out at the bottom, and achieves below available returns.

When asked by the Senate chairman how he deals with market levels in his business, Mr. Graham responded insightfully:

"I have never specialized in economic forecasting or market forecasting either. My own business has been largely based on the principle that if you can make your results independent of any views as to the future you are that much better off.

I think our success is due to our having established sound principles of purchase and sale of securities and having followed them consistently through all kinds of markets."